Christmas can be an isolating time for people with dementia

This article comes to us from Unforgettable.org. Check them out for plenty of tips, ideas, and interesting articles related to memory and dementia:

For those living with dementia it is easy to be forgotten.

For the family and professional carers it can seem overwhelming and hopeless.

Unforgettable can help on every step of the journey with practical advice, specialised products and a supportive community.

Christmas can be an isolating time for people with dementia

The song may claim ‘it’s the most wonderful time of the year’, but for many people with Alzheimer’s disease or other types of dementia, it can become the opposite, as Christmas can be very isolating.

That’s what a recent report from the Alzheimer’s Society is hoping to highlight.

They’ve carried out research which has found over half of people affected by dementia find Christmas the most isolating time of the year, with many saying that they actually dread the festive season. Just over half (54%) say the see their friends and family less often over the Christmas period than they did before their diagnosis.

END_OF_DOCUMENT_TOKEN_TO_BE_REPLACED

This post is on the rarer forms of dementia, which make up the minority of dementia diagnoses. These also include reversible and treatable dementias, such as those resulting from infectious diseases or nutrition deficiencies. As Alzheimer’s disease is the most commonly diagnosed form of dementia, it receives the majority of focus in awareness raising, research, and funding for treatment and prevention. This can leave those with the rarer forms of dementia without much information on their dementia type or options for treatment, fewer disease-specific support options, and feeling frustrated and isolated. My hope is that this post will be informative and raise your awareness on other types of dementia that individuals and families face.   END_OF_DOCUMENT_TOKEN_TO_BE_REPLACED

What is Alzheimer’s Disease (AD)?

This information comes to us from Alzheimer’s Society, the UK’s leading dementia support and research charity for people living with dementia, their families, and care partners. And also one of my favorite sites to find news and information on Alzheimer’s disease and other dementias.

Listen to the audio version of What is Alzheimer’s disease?

This information comes from Alzheimer’s Society in the UK.

CHAIN is a multi-professional mutual support network of almost 14,000 research-literate people working in the NHS family of organisations, and others with a stake in researching and improving peoples’ health in the UK and beyond. We’re co-facilitating the CHAIN Dementia sub-group, and are inviting colleagues to join. Membership is free and members can use the group as a sounding board for ideas, share good practice and information about the latest resources and events available.
To join CHAIN please visit: http://chain.ulcc.ac.uk/join.html

What is Mild Cognitive Impairment (MCI)?

Mild cognitive impairment (MCI) is a term used to describe a condition involving problems with cognitive function (their mental abilities such as thinking, knowing and remembering). People with MCI often have difficulties with day-to-day memory, but such problems are not bad enough to be defined as dementia. This factsheet explains the link between MCI and dementia, and the benefits of having MCI diagnosed. It then looks at reducing your risk of developing MCI and dementia. END_OF_DOCUMENT_TOKEN_TO_BE_REPLACED 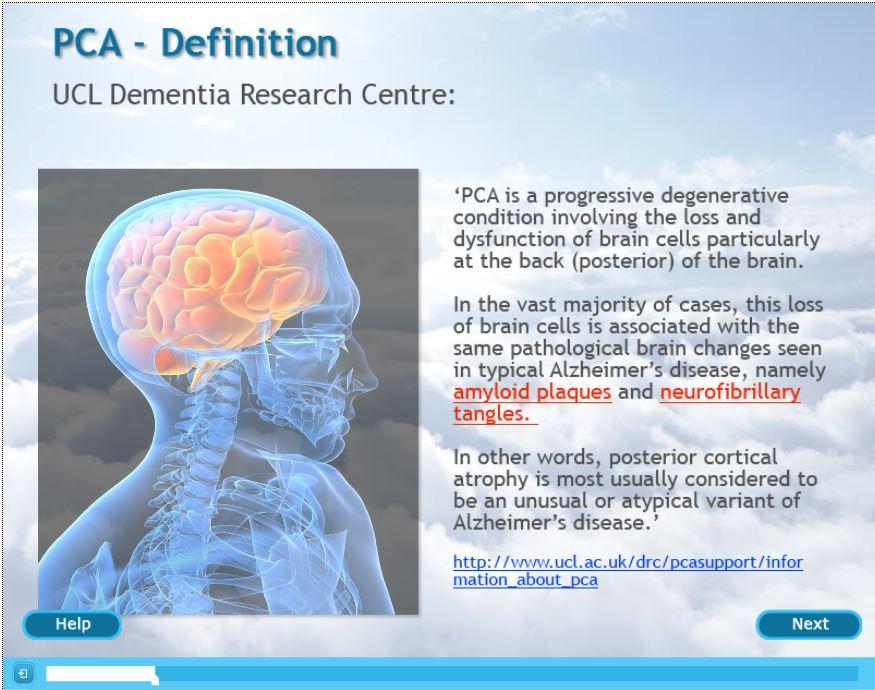 What is Posterior Cortical Atrophy?

Posterior cortical atrophy (PCA), also known as Benson’s syndrome, is a rare degenerative condition in which damage occurs at the back (posterior region) of the brain. In the vast majority of people, the cause of PCA is Alzheimer’s disease.

The first symptoms of PCA tend to occur when people are in their mid-50s or early 60s. However, the first signs are often subtle and so it may be some time before a formal diagnosis is made.

Initially, people with PCA tend to have a relatively well-preserved memory but experience problems with their vision, such as difficulty recognising faces and objects in pictures. They may also have problems with literacy and numeracy. These tasks are controlled by the back part of the brain, where the initial damage in PCA occurs. END_OF_DOCUMENT_TOKEN_TO_BE_REPLACED

But first, a little bit from the University of Notre Dame:

The National Institutes of Health refers to Niemann-Pick disease type C as “childhood Alzheimer’s” because of similarities in the brains of NPC and Alzheimer’s disease patients. Symptoms can include deterioration of memory and balance, lung and liver failure, delayed motor development, and seizures. The disease usually appears in early childhood, leading to neurological problems that are typically fatal.

From the Addi & Cassi Fund webpage (the twins with NPC pictured, above):

Every person in the world is born with the Niemann Pick Type C gene and could not live without it. The NPC1 gene is located on Chromosome 18 and the gene regulates human cholesterol metabolism at the cellular level.  We were born with major problems on this cholesterol gene which in turn causes our fatal disease.

Some doctors believe Niemann Pick Type C and Alzheimer’s could be connected due to cholesterol and lipid issues (see The Scientist Magazine article, November 2008) while virus researchers have discovered that the Niemann Pick Type C gene helps both HIV-AIDS and Ebola infect humans.  We are told by top scientists that because our cholesterol gene does not work, we can’t get infected with many viruses that infect people who have healthy functioning NPC genes.

According to Dr. Francis S. Collins, Director of the NIH, “While many of the genes we will initially be pursuing are responsible for rare disorders, what we learn from rare disorders often has profound consequences for our understanding of more common conditions.”

When I was writing my thesis on technologies for dementia, the youngest case of dementia that I found recorded was in a 6 year old girl who had Niemann-Pick disease type C – you can read about it in this article from Alzheimer Society, starting on page 16. You can also read one of my other posts about a 12-year old girl with this disorder here (og på dansk her). END_OF_DOCUMENT_TOKEN_TO_BE_REPLACED

What is Progressive supranuclear palsy?

Progressive supranuclear palsy (PSP) is a rare progressive movement disorder, sometimes known as Steele-Richardson-Olszewski syndrome. It affects many areas of the brain and people typically have symptoms similar to those of Parkinson’s disease. As with Parkinson’s disease, there may be a tremor (involuntary shaking of the body and limbs), but this is much less prominent in PSP. The specific parts of the brain that are damaged include the regions that control eye movements and those that keep a person steady when they are walking, resulting in frequent falls. The cause of the damage that occurs in PSP is unknown, but is linked to abnormal deposits of a protein called tau.

PSP mainly occurs in people over the age of 60, although it occasionally affects younger people. One striking symptom is paralysis of eye movements and problems with double vision. Other symptoms include stiff or slow movements, difficulties walking and speaking, swallowing problems and personality changes. END_OF_DOCUMENT_TOKEN_TO_BE_REPLACED

Normal pressure hydrocephalus is one of the rarer forms of dementia and one of the treatable (and often reversible) forms.

What is Normal pressure hydrocephalus?

Normal pressure hydrocephalus occurs when excess fluid accumulates in the brain, but without causing pressure to build up in the brain tissue. Symptoms include difficulties with walking, dementia and urinary incontinence. In most cases the cause is unknown, but it sometimes develops after recovery from a head injury, brain haemorrhage (a bleed in the brain) or severe meningitis (an infection of the tissue surrounding the brain). END_OF_DOCUMENT_TOKEN_TO_BE_REPLACED

What is Korsakoff’s syndrome?

Korsakoff’s syndrome is a brain disorder usually associated with heavy alcohol consumption over a long period. Although Korsakoff’s syndrome is not strictly speaking a dementia, people with the condition experience loss of short-term memory. This factsheet outlines the causes, symptoms and treatment of the syndrome. This factsheet also explains the possible relationship between Korsakoff’s syndrome and ‘alcohol related dementia’. Alcohol consumption is increasing in the UK and therefore these conditions are expected to become more common in the future. END_OF_DOCUMENT_TOKEN_TO_BE_REPLACED

What is Huntington’s disease?

Huntington’s disease is an inherited disease causing abnormal movements and problems with coordination. Other symptoms include mood problems and cognitive impairment that gets progressively worse over time. The age of onset and the course of the disease varies for each person, and dementia can occur at any stage of the illness. END_OF_DOCUMENT_TOKEN_TO_BE_REPLACED

What is HIV-associated neurocognitive disorder (HAND)?

HIV (human immunodeficiency virus) causes an infection that weakens the immune system, making it harder for the body to fight infections and disease. HIV infection can cause a number of different problems in the brain, which affect up to half of people with HIV. This is known as HIV-associated neurocognitive disorder (HAND). HAND is one of the rarer forms of dementia. Rarer forms account for only around 5 per cent of all dementia cases in the UK.

Difficulties with memory, thinking and reasoning (aspects of cognition) are common with HIV, but they are usually mild and dementia is much rarer. Before the use of antiretroviral drugs (medication that helps to control HIV), around 20-30 per cent of people with advanced HIV infection previously developed dementia. This figure has now decreased to around 2 per cent. END_OF_DOCUMENT_TOKEN_TO_BE_REPLACED

What is Corticobasal degeneration?

Corticobasal degeneration is one of the rarer forms of dementia. Rarer forms account for only around 5 per cent of all dementia cases in the UK.

Corticobasal degeneration (CBD) is a rare disease in which parts of the brain become damaged and begin to shrink. The outer layer of the brain, known as the cortex, and deep parts of the brain, called the basal ganglia, are both affected. It is not yet known what causes CBD but producing too much of an abnormal form of a protein called tau is thought to play a role. The disease usually affects people between the ages of 60 and 80. END_OF_DOCUMENT_TOKEN_TO_BE_REPLACED

What is Creutzfeldt-Jakob disease?

Creutzfeldt-Jakob disease (CJD) is one of the rarer forms of dementia. Rarer forms account for only around 5 per cent of all dementia cases in the UK.

CJD is caused by an abnormally shaped protein called a prion infecting the brain. Sporadic CJD, which normally affects people over 40, is the most common form of the disease. It is estimated that the disease affects about one out of every 1 million people each year. It is not known what triggers sporadic CJD, but it is not known to be inherited or otherwise transmitted from person to person. END_OF_DOCUMENT_TOKEN_TO_BE_REPLACED

What is frontotemporal dementia?

Frontotemporal dementia (FTD) is one of the less common forms of dementia. The term covers a range of specific conditions. It is sometimes called Pick’s disease or frontal lobe dementia. This factsheet explains what frontotemporal dementia is, who gets it, and the symptoms. It also describes how it is diagnosed and the treatment and care that is available. END_OF_DOCUMENT_TOKEN_TO_BE_REPLACED