What is Corticobasal degeneration?

Corticobasal degeneration is one of the rarer forms of dementia. Rarer forms account for only around 5 per cent of all dementia cases in the UK.

Corticobasal degeneration (CBD) is a rare disease in which parts of the brain become damaged and begin to shrink. The outer layer of the brain, known as the cortex, and deep parts of the brain, called the basal ganglia, are both affected. It is not yet known what causes CBD but producing too much of an abnormal form of a protein called tau is thought to play a role. The disease usually affects people between the ages of 60 and 80.

The first symptoms that people with CBD experience are problems with movement, such as stiffness and jerkiness in one or more of their limbs and a failure to control hand movement on one side (known as ‘alien hand syndrome’). As the disease progresses, these problems will often spread to other limbs. Many people experience symptoms of dementia, including problems with memory and thinking. A small proportion of people with frontotemporal dementia also develop CBD as an ‘overlapping’ condition. Other symptoms of CBD include loss of balance and co-ordination, and difficulties speaking and swallowing.

Currently, there is no cure or treatment available to slow the progression of CBD, but drugs may help some symptoms and physiotherapy, occupational therapy and speech and language therapy may be beneficial. On average, people live for around eight years after their symptoms first appear. 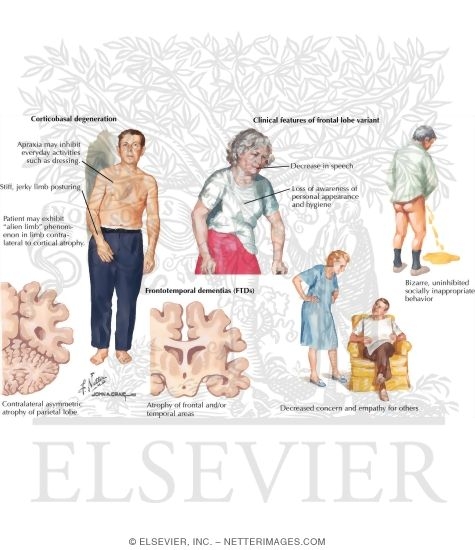 One thought on “What is Corticobasal degeneration (CBD)?”