What is HIV-associated neurocognitive disorder (HAND)?

HIV (human immunodeficiency virus) causes an infection that weakens the immune system, making it harder for the body to fight infections and disease. HIV infection can cause a number of different problems in the brain, which affect up to half of people with HIV. This is known as HIV-associated neurocognitive disorder (HAND). HAND is one of the rarer forms of dementia. Rarer forms account for only around 5 per cent of all dementia cases in the UK.

Difficulties with memory, thinking and reasoning (aspects of cognition) are common with HIV, but they are usually mild and dementia is much rarer. Before the use of antiretroviral drugs (medication that helps to control HIV), around 20-30 per cent of people with advanced HIV infection previously developed dementia. This figure has now decreased to around 2 per cent.

Neurocognitive disorders in people with HIV may be caused by the virus directly damaging the brain. They may also be the result of a weakened immune system enabling infections and cancers to attack the brain.

Symptoms may include problems with short-term memory, learning, speed of thinking, difficulties with concentration and decision making, unsteadiness and mood changes. People may also have problems with their sense of smell.

Some people with HIV may experience only a few very mild symptoms, such as a decline in the ability to think quickly or clearly. These mild impairments do not amount to dementia.

HIV is easily overlooked as a possible cause of dementia. Even when someone is known to have HIV infection, cognitive impairment can sometimes be difficult to diagnose. This is because the symptoms are similar to those of other conditions, such as depression.

Treatment with a combination of at least three antiretroviral drugs often prevents cognitive impairments worsening and, for many people, can reverse the cognitive damage caused by HIV. Rehabilitation programmes may also help people with HAND to re-learn skills. 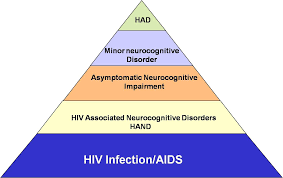 One thought on “What is HIV-associated neurocognitive disorder (HAND)?”