A Brief History of Telemedicine

I compiled this with my internship report for the World Health Organization Regional Office for Europe, as a part of my work on eHealth and the Global Network of Age-Friendly Cities. Much of this material, I first gathered when I was teaching a Master’s Engineering course on Telemedicine Techniques and Aspects for Aalborg University Department of Electronic Systems in 2010. 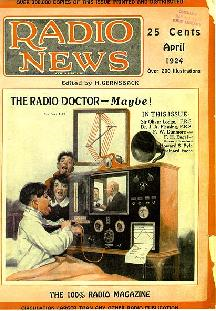 1920s: Help for ships
Radios were used to link physicians at shore stations to assist medical emergencies at sea.

1924: The first exposition of Telecare
The cover of “Radio News” magazine from April 1924.

1955/9: Telepsychiatry The Nebraska Psychiatric Institute was one of the first facilities in the country to have closed-circuit television in 1955. In 1971 the Nebraska Medical Center was linked with the Omaha Veterans Administration Hospital and VA facilities in two other towns.

Nebraska Psychiatric Institute began using a two-way closed-circuit TV link between the Institute itself and Norfolk State Hospital about 112 miles away. The link was used for education and consultations between specialists and general practitioners.

This type of economic evaluation identifies the resources used to deliver the services of a specific program and then values the associated opportunity costs.

Cost-effectiveness analysis (CEA) is a more inclusive economic evaluation method in that it considers both costs and outcomes of a program.

Benefit–cost analysis (BCA) is the most comprehensive type of economic evaluation and allows the study of interventions with multiple outcomes.

A positive net benefit and a benefit–cost ratio larger than indicate that the economic benefits are larger than the economic costs, which suggests that the program is worth implementing from a societal perspective.

BCA is a particularly useful approach in telemedicine, where costs and outcomes can vary widely among specialties due to the fact that each specialty area addresses unique illnesses, follows specific clinical guidelines, employs different telemedicine equipment, and confronts different barriers to access.

2 thoughts on “A Brief History of Telemedicine”